Cows Rule the Roost with DeLaval

Out with the Old and In with DeLaval

When the time came to replace their 36 year old herringbone parlour, the Jones family at Farringdon Hill Farm considered the future of dairy farming and its effect on staff when making a replacement choice.

For the last 36 years, the Jones family had been using the same herringbone milking parlour with little complaint. Their dairy farm at Farringdon Hill in Stogursey, Bridgewater had dealt with expansion by repeatedly upgrading the 8/16 herringbone parlour through the years.
However, the Joneses son, Tom had concerns for the future as dairy farming put increasing pressures on staff and threatened their work/life balance. So, in 2011, when the time came to look at changing their aging herringbone parlour, Tom decided to consider replacements that would allow greater flexibility with farming duties while maintaining the output and cow comfort of their 180-strong Holstein herd.

Following his own research, and with help from DeLaval dealership, B H White, Tom was guided through the alternatives before settling on the DeLaval robotic Voluntary Milking System (VMS). At a cost similar to that of a replacement herringbone parlour, the decision was, in the end, an easy one to make. 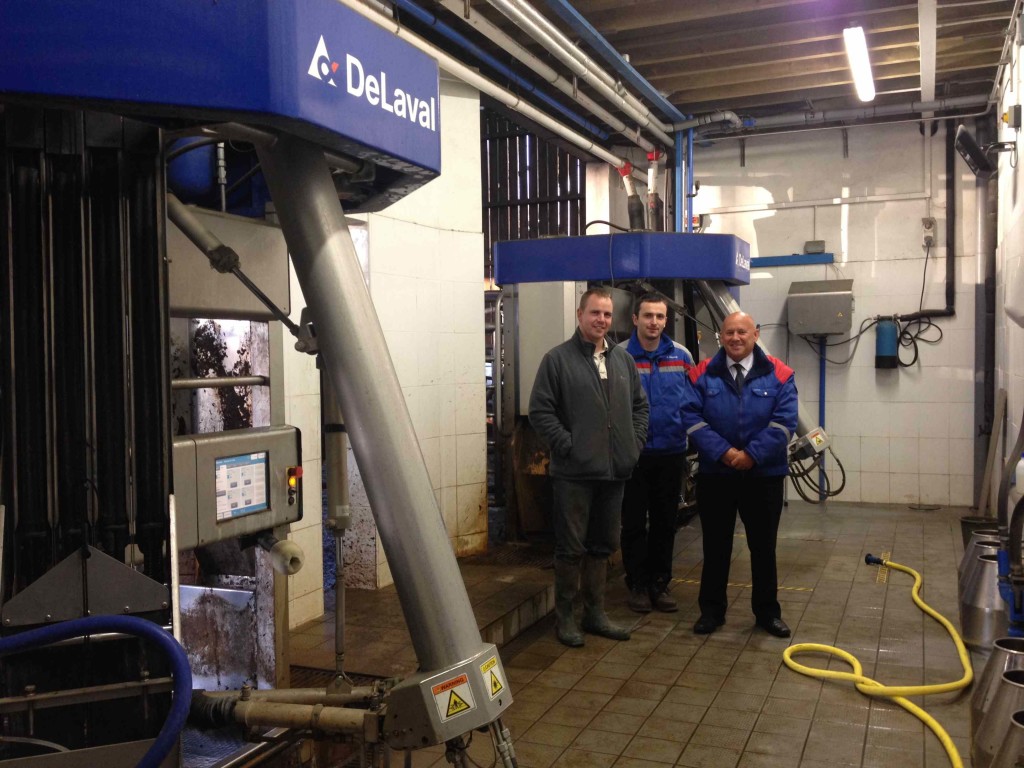 As it turns out, Tom’s choice has been a wise one. Two robotic milking machines were installed in 2011 along with full housing, with a further system joining the farm in January 2013. The Joneses’ cows have taken to all three VMSs very well – in the last 12 months the VMSs have completed almost 150,000 milkings and milk yield has risen by 10%.

Key to Tom’s decision to purchase a Delaval system is the fact that, with flexible movement much the same as a human arm, the robotic arm on the DeLaval VMS is better for irregular teats. Hydraulic, rather than pneumatic, the DeLaval VMS robotic arm prepares the teats then attaches the cups quietly, accurately and swiftly before moving out of the way during milking, returning to spray the teats before the cow moves on.

Another big difference is that, in comparison to other options, the DeLaval VMS is a more hygienic system, offering automatic programmable cleaning, so that the stalls remain sanitary at all times.
“It’s a brilliant system,” says Tom, who finds the technical side of the VMS easy, using DeLaval’s Delpro software to manage the robots. He’s also happy to have the ability to adjust the feed type and quantity, which is particularly useful for drying out cows.

“It isn’t a case of plug in the machine and leave them to it,”

continues Tom, but the VMSs used in conjunction with a free cow traffic system have nevertheless saved on labour costs, increased working flexibility and enabled a lifestyle change. While a full time herdsman is employed to monitor the cows, he now also has time to focus on other duties.

Tom elected to include DeLaval’s optional Online Cell Counter to monitor for dips in milk yield and cow health problems, particularly mastitis. This means that Farringdon Hill Farm no longer needs to bother with time-consuming stripping and that any problems can be identified through the OCC software, long before signs of illness, and when preventative action can still be effective.

The additional steam backflush provides an effective and non-toxic method of killing any mastitis-causing bacteria, rather than resorting to peracetic acid to clean the liners and clusters. These extra precautions help to keep the cows healthy and consistently maintain a cell count at 165 and Bactoscan at 20.

Following the installation of DeLaval’s VMSs, Farringdon Hill Farm is now able to offer true job fulfilment – working fewer hours with healthy, content cows delivering an increased dairy yield. With cows and staff as happy as these, the Joneses are no doubt wondering, why didn’t they do it sooner?